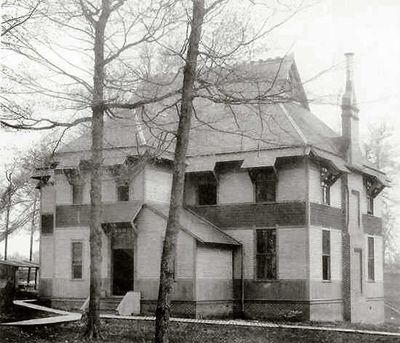 The original Maxwell Hall as it appeared in 1891

The building was originally a two-story, 60 feet long by 40 feet wide structure, located 85 feet south and 19 feet west of the northwest corner of Wylie Hall. It was designed by George W. Bunting and constructed by James S. Williams for $3,800. It was ready for classes on September 5. It was originally used as a chapel, and contained six classrooms used for philosophy, classical, and literary classes.

In 1901, it was moved 210 feet east when Lindley Hall was built. It was then located roughly at the same place as Simon Hall.

From 1896 to 1906, it was used as the women's gymnasium, until the Student Building was built.

It was then used by the music department from 1906 to 1937. In 1918, the second story was removed, and a small addition of offices was made to the east. In 1921, a detached annex (initially called the Music Annex, later known as the Mitchell Annex) was added to the north.

From 1937 to 1940 the sociology department was temporarily located in Mitchell Hall while they awaited renovation of Rawles Hall.

From 1941 to 1962, the building was used by the Fine Arts department, at which time a concrete block addition was constructed to the north (called the Hope addition, named after chairman Henry Hope), and the Mitchell Annex was connected to the main building. In 1947, two surplus army barracks buildings were added on the south and used for lectures and studios.

From 1962 until sometime in the 1980s, the building was used by the Audio-visual department and educational media department. It was then used for storage for many years, and razed in 1991.