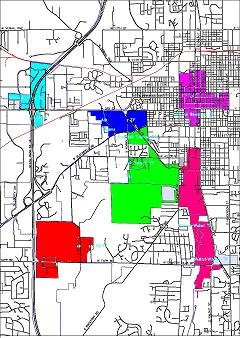 There are ten Tax Increment Financing districts in Monroe County, seven of which are inside Bloomington city limits.

The seven TIF districts in Bloomington are known as:

Three additional TIF districts exist in the county outside of Bloomington city limits.

The Westside Economic Development Area TIF district -- also commonly called the Richland TIF -- is in a roughly triangular district of more than 600 acres, bounded by 3rd Street, SR 37, Woodyard Road, and Hartstraight Road. It is the location of Cook Group's world headquarters. The district was created in 1995 and the county borrowed approximately $3 million based on expected tax revenues in the district. The money went to:

In 2004, the borrowed money was fully repaid, and in 2007 the county approved borrowing an additional $5 million in order to build a new Life Sciences Center at Ivy Tech.

The value of the property in this district fluctuates somewhat from year to year, but overall has seen robust growth, well over the amount required for debt service on the bond.

This small TIF consists of 80 acres of property around the Fullerton Pike interchange of SR 37; only 63 acres are considered to be capable of being developed. The Fullerton Pike TIF district is different from the other two in Monroe County in that there is no debt associated with the district.

The Fullerton Pike TIF district was originally formed in order to finance the creation of a new east-west corridor from Walnut Street to SR 37 by connecting Fullerton Pike and Gordon Pike. It is unknown when or if this extension will take place, and the revenues from this TIF district will only represent a small proportion of the funding required to complete the road.

Monroe Hospital lies in this district and is the major property owner.

TIF revenue has remained fairly stable since the district was created.

The district officially known as "North Park" and unofficially dubbed "Criderville" comprises roughly a square mile, bounded on the west by Curry Pike, on the north by SR 46 West and Acuff Road, on the east by SR 37, and on the south by Vernal Pike, excluding most of the existing residentially developed properties. The county borrowed $7 million based on the expected value of the property in this district, and will turn the money over to construction company Crider & Crider to develop the area.

Crider & Crider also own the property they will be developing with the $7 million, which is why it is often referred to as "Criderville."

Cities and counties borrow money (bond) against anticipated future property taxes within a TIF area, and the money borrowed can be used for any "infrastructure" project. There are virtually no limits on what can be considered "infrastructure." In effect, designating the area as a TIF allows the city or county to target property taxes collected in the area to pay back the debt.

In theory, the value of the property in the area will go up ("increment") and the city or county will be able to collect additional taxes to pay off the debt. However, since the additional taxes collected through growth will not go to other units of government (county, city, township, schools, library, etc.), even as these units are expected to provide services to people and businesses inside the TIF, either these units must accept less property tax revenue or raise taxes in non-TIF areas. Note that only the *additional* assessed value created through growth is captured by the TIF; the initial value of the property remains with the township in which the property is located. In addition, any general growth in assessed value through reassessment or trending values of real estate in the surrounding that is not specifically attributable to TIF-related growth is not captured by the TIF and remains with the township. Each year, a process called TIF neutralization apportions any growth in assessed value between what is attributable to the TIF and what is not.

Some, however, consider the TIF strategy to be a political manoeuvre allowing development projects to take place without the explicit approval or disapproval of elected officials (1). TIF designation, as well as the borrowing of money for the TIF and the determination of how, and where, that money will be spent is given to a five-member redevelopment commission. Members of redevelopment commissions are not elected, but have both executive and fiscal decision-making powers.

Originally implemented in California, during the mid-1950s, Tax Increment Financing (TIF) was seen as a way of revitalizing and redeveloping inner-city brownfields. By guaranteeing that any new taxes collected in the area (called a Tax Increment District, or TID) could only be spent within the TID, TIF was hoped to be an incentive to private redevelopment of blighted land.

Today, the strategy of Tax Increment Financing (TIF) is used by thousands of cities around the country as a loophole to state-imposed property tax caps.

There are more than 100 TIF districts in Indiana, more than all but three other states. In Indiana, the overwhelming use of TIF financing is not the original intention of redevelopment of blighted urban areas, but the conversion of suburban "greenfields" into retail shopping. 70% of TIF districts in Indiana are used for suburban retail development (2).

The process for creating a new TIF district is laid out by state law and is as follows (1):