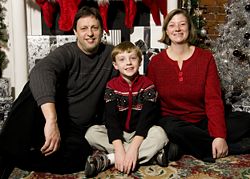 Ben Fulton is a Bloomington software engineer. Born in Bloomington to Indiana University graduate students, he absorbed the academic life before the family left for Richmond, Indiana, in the mid-1970's. He attended Richmond High School until the age of 16, then went to work for a few years before attending Richmond's Indiana University East. Earning an associate's degree in Computer Science from that campus, Mr. Fulton then returned to Bloomington in 1987 to complete a Bachelor's degree.

A former member of the IU Men's Ultimate Frisbee team and IU Juggling Club, Fulton keeps himself in shape with running and martial arts, and currently holds the rank of Purple Belt at Monroe County Martial Arts. He is married to the former Cathy Smith, and they have one child.

A prodigious online writer, Mr. Fulton can be reached through any of the following networks:

A lifetime of dining in Bloomington has led Mr. Fulton through many restaurants, both current and defunct:

A fan of opera, the theater and most forms of live entertainment, Fulton has attended many Bloomington performances, including: