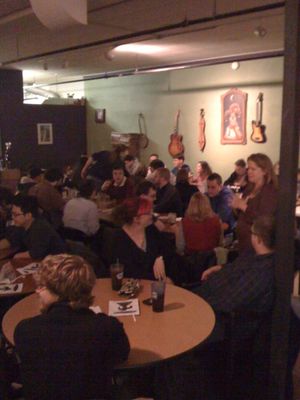 A Geek Dinner is an opportunity for technically-minded people to get together and chat about technology over food and drinks. Dinner groups exist in such widely varying places as London, South Africa, New Orleans, and Louisville, while other locations like Seattle and Silicon Valley tend to spontaneously organize the events around a particular blogger or web site.

The Bloomington group held its first dinner at Max's Place, on October 23rd, 2007 at 7PM. The turnout was quite good with 18 people out of an expected 8 showing up. Since then dinners have been held at various locations around Bloomington. As the word has gotten out, more and more people are coming.

The next Geek Dinner will be held at the Irish Lion on June 3rd, 2014.

The first Geek Dinner of 2008 was held at El Norteno on January 30th, 2007. A wide variety of attendees came from several different companies, as well as many IU students and faculty.

A Geek Picnic was held at Bryan Park on June 29th, 2008. Geeks and their families attended.